How “Chronic Cardio” Can Make You GAIN Weight!

Ok, I’m writing this because this seems to be one of the most misunderstood concepts in fitness.  Most people, when asked if they exercise, will say that they do, they run “x” amount of miles per day, or week, or whatever.  No sprinting, no heavy weight training, just long, slow distance running.  And most people tend to agree (when I say most, I mean most people that I talk to OUTSIDE of the gym) that this is the best way to stay healthy and fit.  So let’s think about this for a second, simply from a “fitness” basis.

First off, you need SOME sort of definition of fitness.  This will probably be different for everyone (CrossFitters aside), so let’s try and examine exactly what long, slow running will do for you.  The first and most obvious gain that you will make is in your cardiovascular and respiratory endurance.  Will running in this fashion actually improve your ability to run long distances?  Sure.  Is it the most efficient way of doing this?  The answer to that is not so clear.  And I’m not here to establish the most efficient way of training for a marathon.  At least not in this post.  So you’re increasing your lung capacity.  I’ll give you that.  Now, what about your overall strength?  No, probably not.  Power?  Noppers.  Not even a little.  Speed? Agility?  Flexibility?  Again, the answer here is no.  You are actually DEtraining your self in these categories, which doesn’t seem like the goal of becoming “fit”. Study after study show that resistance training (ie- lifting weights) have a much stronger impact on health and longevity than chronic cardio.  Increased muscle mass leads to more graceful ageing, and prolonged health.  Chronic cardio tends to actually REDUCE muscle mass.  I’m not saying that we all need to look like Arnold, but it wouldn’t kill us (quite the opposite, actually) to squat heavy now and then.

Ok, still not convinced that running isn’t great for overall health?  Let’s talk about exactly what exercise in general does to the body.  Exercise is a stress on the body.  Any kind of exercise.  This is how your body adapts and changes, it reacts to the stress and creates ways to deal with it.  That’s the whole idea behind linearly progressing weights in a weightlifting progression.  Keep adding a little weight, and your overall strength will continue to adapt (both neurologically and muscularly).  The example I like to use for this is Milo of Croton.  He was a 6th century BC wrestler from southern Italy.  Basically, his philosophy was “lift a calf everyday, and by the time you grow up, you can lift a cow”.  So when the cow is a baby, lift it up and down, and as the cow slowly grows and gains weight, you’re incrementally increasing the load with which you’re lifting, and eventually you’ll be lifting a full grown cow.   Alright, I’m getting off track here.

Exercise is a stress.  It follows the theory of hormesis, which means generally favorable biological responses to low exposures to toxins and other stressors (such as exercise).  So no exercise = bad.  Also, too much exercise = bad.  The right amount of exercise = GREAT.  So running for hours and hours a week is probably NOT the ideal way to get in your proper amount of exercise.  (In my experience, three to four hours of weight training and some high intensity interval training is all you need at the most for ideal health).

Ok, let’s get this back to the topic of this post, which is weight loss vs, weight gain in terms of what most people call “cardio”.  First, I must say that I am NOT a believer in the calories in / calories our theory of weight loss, because there is WAY more too it than that.  Hormonally, calories act differently inside your body (fat vs protein vs carbs), so if you believe that all you have to do is burn more than you take in is just flat our incorrect.

Let’s take a look at what exactly is going on inside your body when you run for extended periods of time.  I’m going to try and keep this as simple as possible, and not get too much into the science behind it.  First off, it’s important to learn the players/hormones here.  So let’s take a second and meet them:

Blood sugar – glucose, glycogen, carbs.  Used for energy, but will also be stored as body fat.

Insulin – generally this is a nutrient storage hormone, which (among many other things), works to take blood sugar/glucose and store it away as glycogen or body fat.  Your body will store excess sugar as body fat once all your glycogen stores are full.

Cortisol – Also known as the “stress” hormone, cortisol does a whole lot in your body.  Cortisol is a catabolic hormone that will mobilize blood sugar from your liver.  Ancestrally, if we were suddenly encountered with a predator that wanted to eat us (a very acute stressor!), cortisol would kick in, release blood sugar, and we would have the energy to fight or run.  (side note – cortisol in acute situations is very helpful, but in today’s modern world, chronic stress is literally killing us because it’s messing up our cortisol production, insulin sensitivity, etc…)

Leptin – hormone that inhibits apetite.  Recently discovered hormone, goes hand in hand with insulin.  Leptin resistance may be the first step towards insulin resistance, which is how we get fat.  If you lose sensitivity to leptin and can no longer feel full, then you’ll always be hungry and this messes up hormones all the way down the line.

Ok, so now let’s look at what goes on with long-term aerobic exercise.  Any exercise is a stress, which means that cortisol is activated to release glucose.  So your body is flooded with glucose, which spikes insulin because your body doesn’t want all that glucose floating around everywhere.  So your body keeps releasing insulin, and chronically elevated levels of insulin is what begins to make your body resistant to it.  This is where things start to go awry.  Because your body is becoming more resistant to insulin, your cells don’t realize that there is insulin in the blood stream already (even though there are actually ELEVATED levels), so it releases MORE insulin.  So insulin keeps trying to work, and it will store energy away in cells that are still insulin-sensitive.  Now, while all this is happening, your body continues to nede glucose, and so begins to break down muscle proteins via a process called gluconeogenesis.  So you have a constant supply of glucose being taken from muscles, insulin is working super hard to store away all of this glucose as body fat, and your body is being flooded with so much insulin that it starts to become both leptin and insulin resistant. 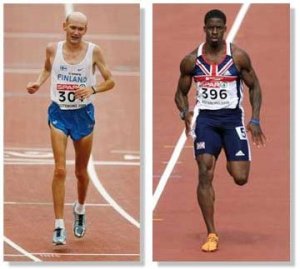 Who would YOU rather aspire to be?

This can lead to that skiny-fat look.  Where you’re skinny, but still hold on to a lot of body fat, for men especially around the belly, and for women it tends to be more in the thighs.  (Again, men and women hold on to body fat in different ways, so tell me again how calories in / calories out makes sense with no regards to hormones?).  So now you have people in an insulin and leptin resistant state, eating a ton of carbs, which converts to sugar in the body, which will spike insulin, which will store away more and more calories as fat, and which continues to make the body more and more insulin resistant, until diabetes sets in. Then we’re really fucked.

The amazing part of all of this, is that we can train our bodies to run in a different way, in less time, and with more benefits to other aspects of fitness.  Lifting heavy weights (squats, deadlifts, cleans, presses, etc…) coupled with high-intensity interval training (combining things like sprints, pullups, pushups, kettlebell swings, jumps, etc..) can produce the same (or better!) aerobic results, but you also get increases in every other area of fitness across the board.  AND all this is done in three to five hours a week TOTAL.  Less time.  More variation.  Better results.  I’m not saying you should never run again, but it should be more of a pleasure things once in a while, rather than a Fitness Plan.  Look at top-level marathoners.  Do they look like the epitome of health?  Now look at a decathlete.  Look a little more like what your goal is?  Just saying.

20 thoughts on “How “Chronic Cardio” Can Make You GAIN Weight!”

Scratch Something In My Cave... Cancel reply